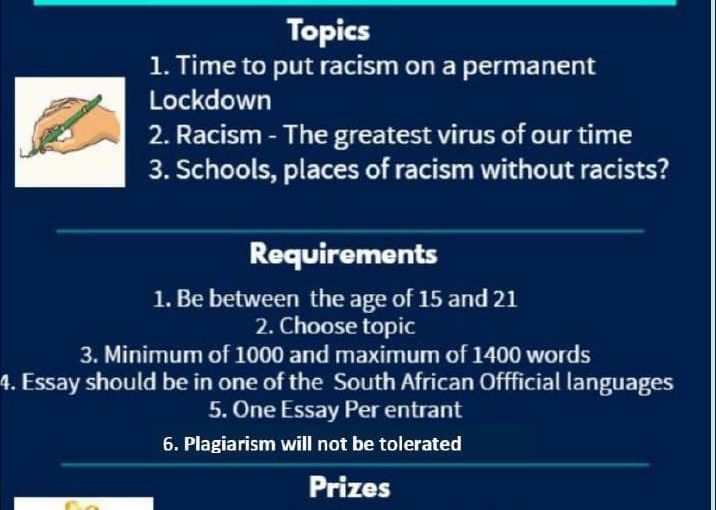 Press statement
06 August 2020
Deadline for the Youth Essay Writing Competition Against Racism has been extended
Young people, who are between the ages of 15-21, who may have missed the deadline to submit
their entries into the Ahmed Kathrada Foundation’s Annual Youth Essay Writing Competition
Against will now have until 28 August 2020 to express their interest.
The closing date for the essay writing competition comes after several requests from young
people who have asked for a final extension. The original deadline was set for Friday, 31 July
2020.
Following the launch, which took place during an online rally on Youth Day this year, the
competition has garnered the interest of young people from across the country, providing them
with a platform to express their voices on the scourge of racism.
Anti-Racism Manager at the Ahmed Kathrada Foundation, Busisiwe Nkosi said that it was no
surprise that this year, the competition was received just as well by young people. “Racism
affects everyone and it is through such platforms that we are able to listen and hear how it
actually affects young people. For us, these are not just essays. The entries we receive have
allowed us to get a glimpse into some of the encounters that youth too, have come across. Some
of them continue to endure uncomfortable encounters with racism at schools, on playgrounds,
shopping malls, social gatherings or even at home.”
“The Ahmed Kathrada Foundation is convinced that more youth voices would like to be heard,
judging by the number of requests for an extension we have received”, Nkosi said.
Nkosi added that since the competition was launched in June, young people have relentlessly
taken up the opportunity to write, which was evident in the overwhelming amount of essays
received so far.
The decision to extend the competition means that the young hopefuls who missed the deadline
will have until August 28 to apply, and no further extension will be granted thereafter. Young
people can write on any one of the following topics:
●Time to put racism on a permanent lockdown,
●Racism – the greatest virus of our time,
●Schools, places of racism without racists?
Writers should be between the ages of 15-21 years of age. The essays should be between 1000 to
1 400 words and can be written in any of the official South African languages. Essay writers can
only enter the competition once and plagiarism will not be tolerated.

Issued by the Ahmed Kathrada Foundation 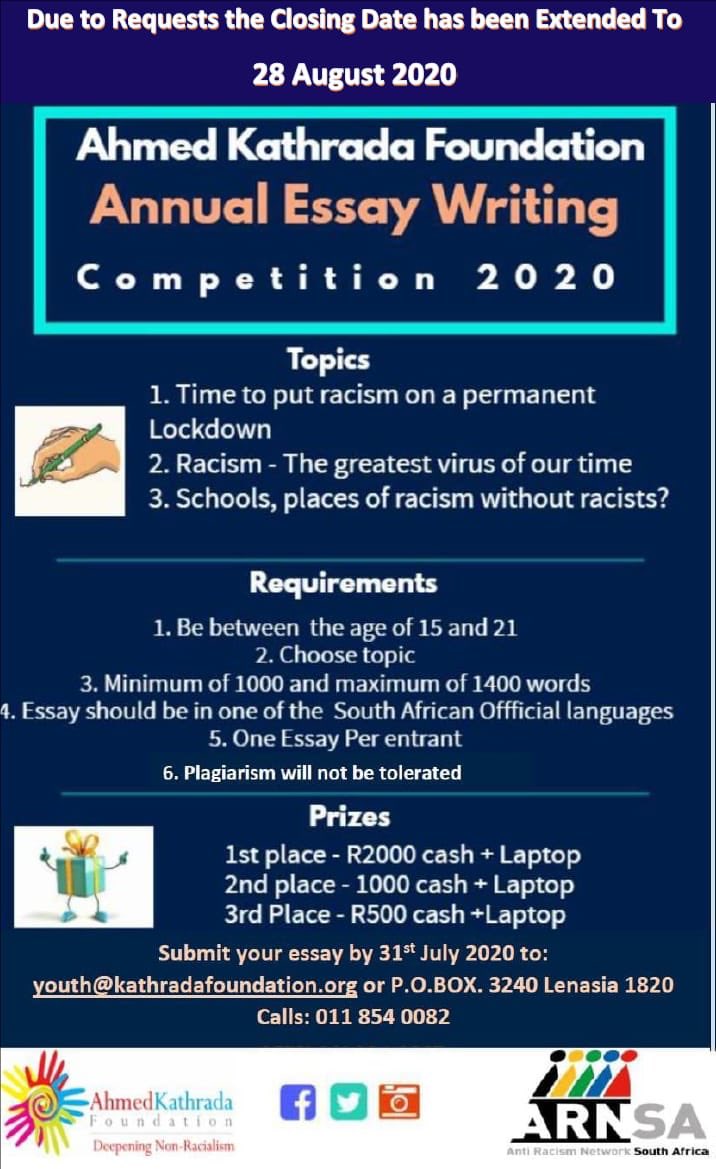